You must have seen the story of Risikat Azeez, the beautiful lady who said she was abandoned by her husband because she and her kids, Kaosarat and Hassanat had blue eyes.

Speaking with Punch, Risikat disclosed that:

No one had this set of eyes before me in my family; both from my mother and father’s side. I’m the first to have this kind of eyes. And when I started bearing children, they also have it and I did not regret that I have this set of eyes with my children.

My husband whose name is Abdul Wasiu Omo-Dada is very aware of the condition of my eyes and he loved me for who I am. Things started getting bad when I had my first child and later my second child. He totally changed and he would shut me up and walk out on me whenever I tried to start a conversation with him. 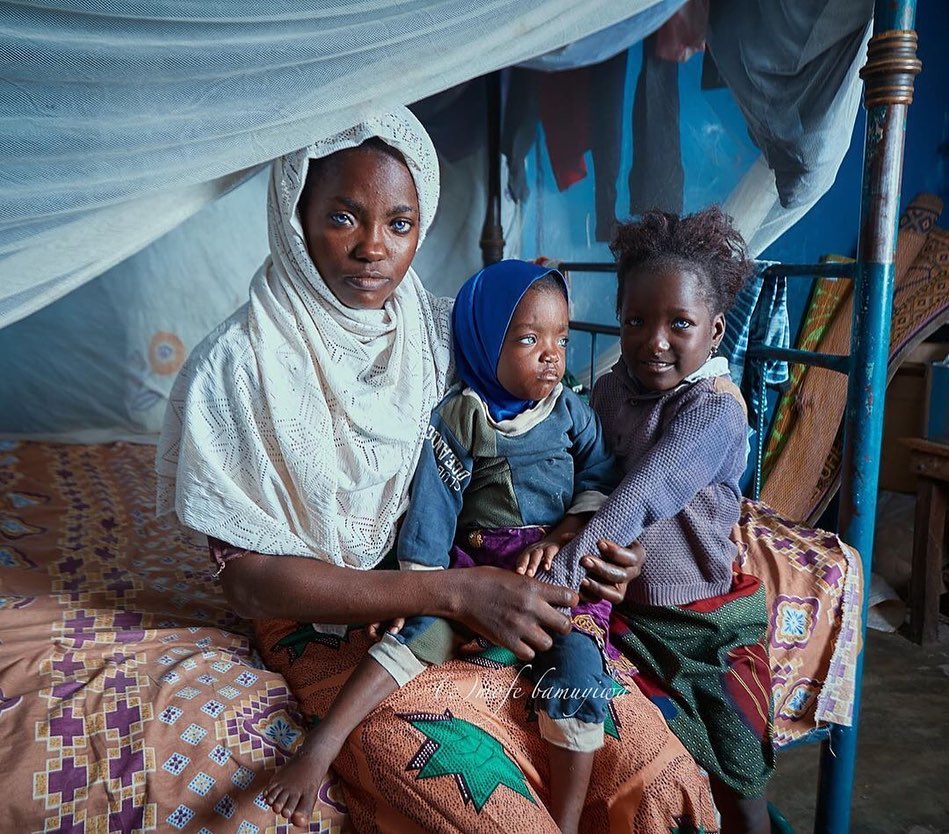 His parents even told him, ‘Will you keep on giving birth to children with this kind of eyes?’ He changed to the extent that he would leave the house for a whole week before coming back home. There was no food and no provision that I had to go to my parents’ place to feed.

My parents later asked me to leave his house. Since I left till now, he has not shown up to ask why I left or ask after me.

My first daughter who is almost five years old has never attended a school before but I will like them to be educated. 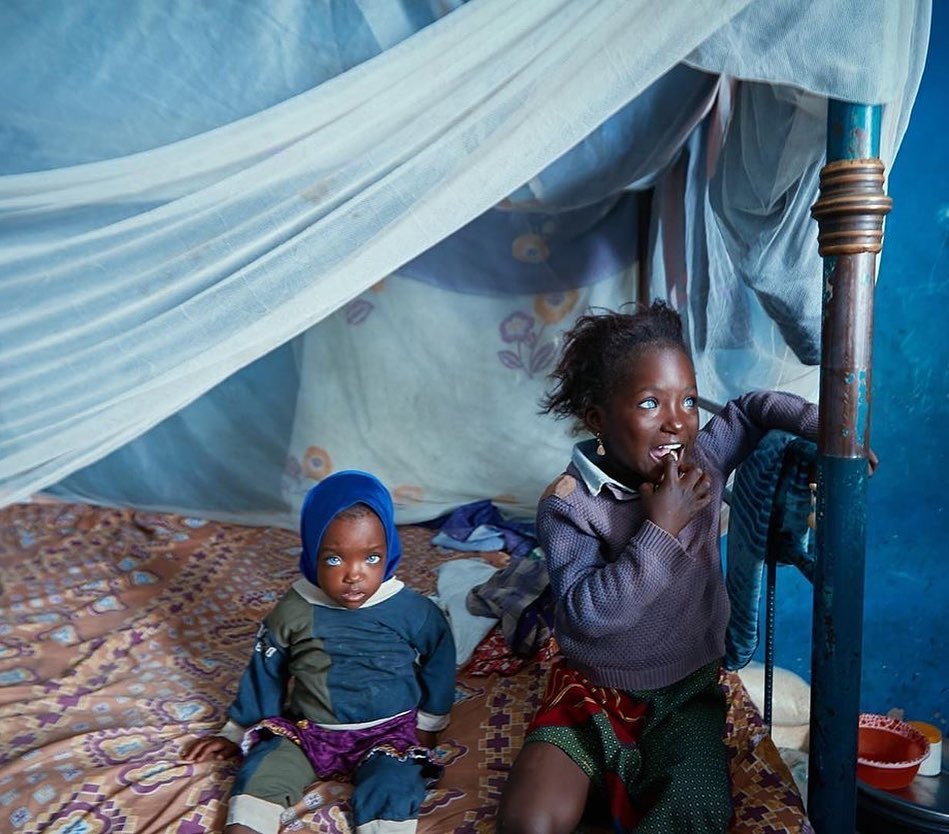 Although her husband Abdulwasiu Omo-Dada, in an interview with Punch said he didn’t abandon her because of her blue eyes, but her “waywardness”, Risikat said after she gave birth to two kids with blue eyes, Abdulwasiu’s family started complaining and that was why he left them. 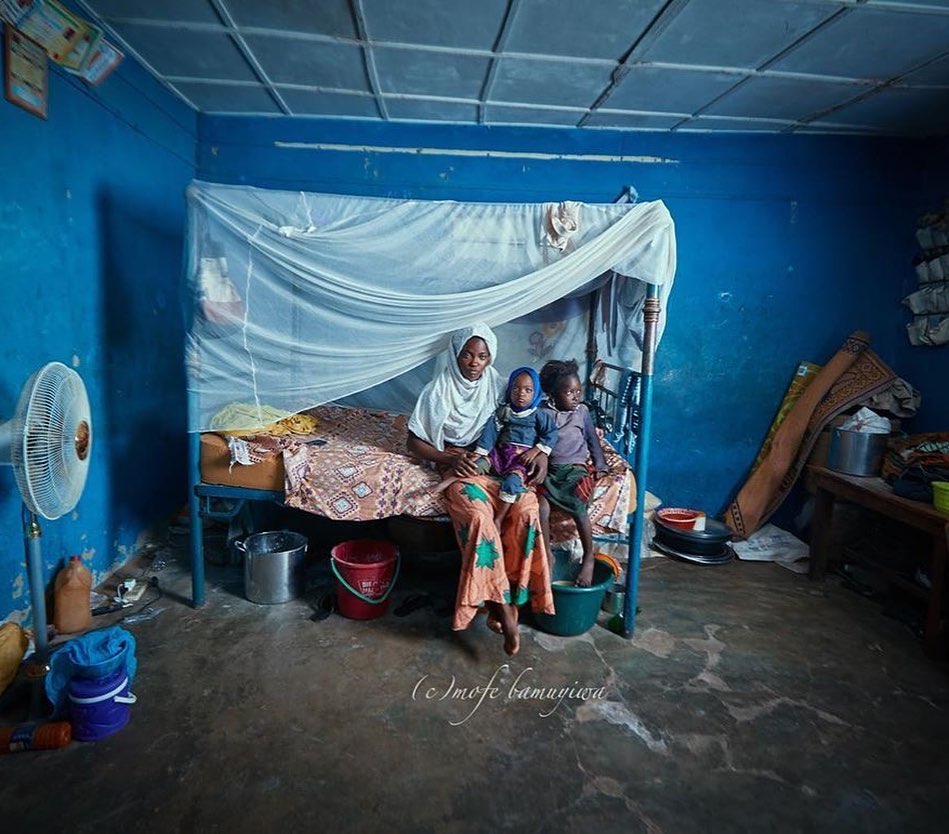 Risikat told Mofe Bamuyiwa, the photographer who took these beautiful photos that she wouldn’t accept to change her eyes from blue to brown even if that could be done. She gave birth to a set of twins, Hassanat and her late twin brother who happened to have brown eyes.

“She couldn’t speaker further but it’s has left us wondering”, Mofe says. 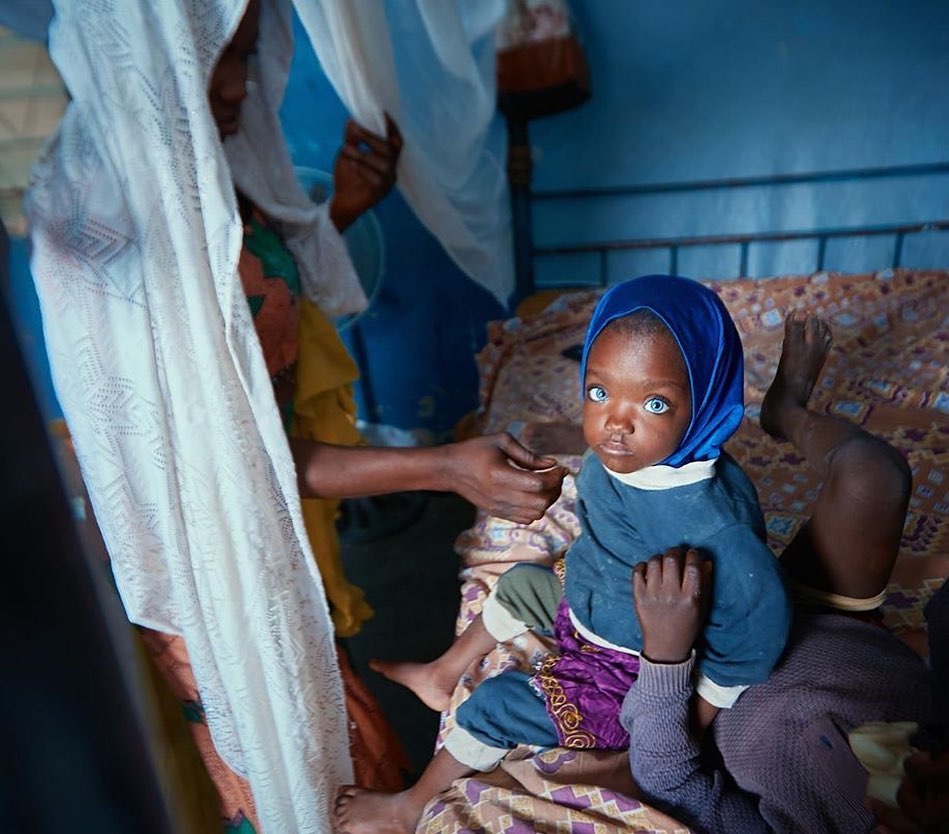 Ocular Albinism is a genetic condition /Mutation ,with the lack of pigmentation at the back of the eyes . Melanin is provided by our cells called Melanocytes , which is found in your skin, hair and eyes .several genes provide instructions for the making of proteins involved in the production of melanin .

RESEARCH
It’s proven that behind every Brown eyes , there is a blue eye. The only difference is the thin layer of the pigment on the surface . If the Pigment is away the the light can enter the stroma and reflects back the blue end of the spectrum

It was believed that the light skin arose in Europeans 40,000 years ago , soon after the people left the tropical Africa for higher latitude .as they moved to the colder regions , needed something to synthesize Vitamins D in places where the UV light is lower , and that caused the change in the mutation of the genes .

More research on this coming soon .

*But as a result of this lack of knowledge RISIQOT was sent out of her husbands house because of her beautiful blue eyes*.

OH NO! How Prominent Nigerian Politician and Hotelier, Gbolahan Died

BREAKING: Nigeria Has Been Added To The List Of Failed States On Wikipedia (Full Details)

8 Things To Do Before Give Someone Your Money In Nigeria

Veteran Actor Kanayo O. Kanayo Celebrates Being The First Lawyer From His Clan…