Veteran Nollywood star actress, Omotola Jalade-Ekeinde has been accused of having a romantic affair with former National Chairman of the All Progressives Congress (APC), Comrade Adams Oshiomhole.

A blog had taken to social media to allege a romantic relationship between the two of them by sharing a photo collage of them.

It threatened to release details at a later time.

“Today is sabbath day so we go keep am holy, we go just dey post pictures, maybe tomorrow when no be Holy day, we go give details, abi how una see am? I come in peace,” the blog wrote. 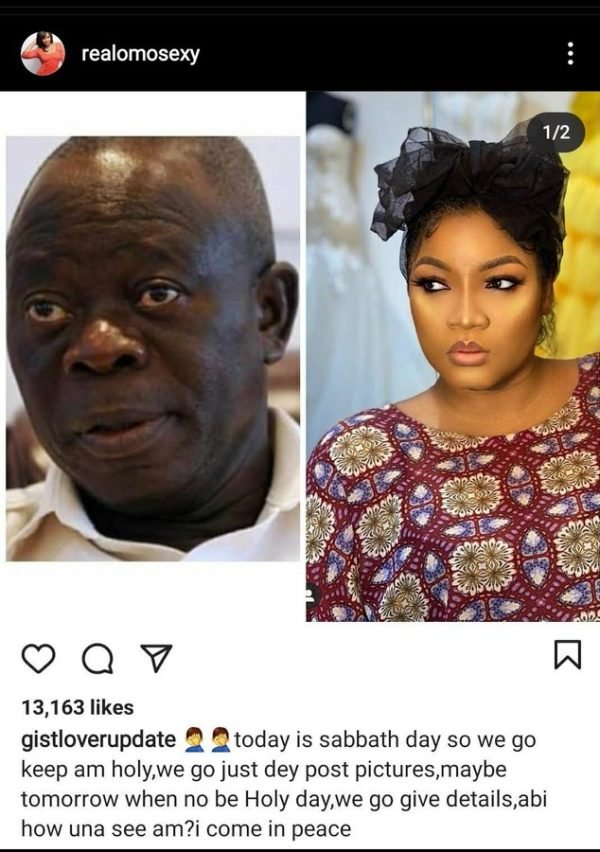 After the post and picture went viral on social media, Omotola on Tuesday has come out to deny having an affair with the former APC National Chairman, Oshiomhole as claimed by the blog.

She charged the blog to prove their allegation within 24 hours and also urged her fans to report the account for the wrong allegation.

DID YOU SEE THIS:  BOOM! Edo 2020: ‘Oshiomhole cannot Distract me This Time’ – Says Ize-Iyamu

Taking to her Instagram account, the actress wrote: “I ordinarily don’t do this but after thinking about it thoroughly and seeking advice I have decided to! So this Blog ran this story and people started coming to my page. I’ve always known there are people who are sick and will tell you stories that have Never happened but to publish that on a platform as big as Instagram? You must be held accountable,” she wrote in a now-deleted post.

“I have demanded they FINISH and PROVE THIS STORY … problem is, this blog is hiding under anonymity! ( faceless blogging ) There are more credible blogs out there … follow blogs with accountability.” 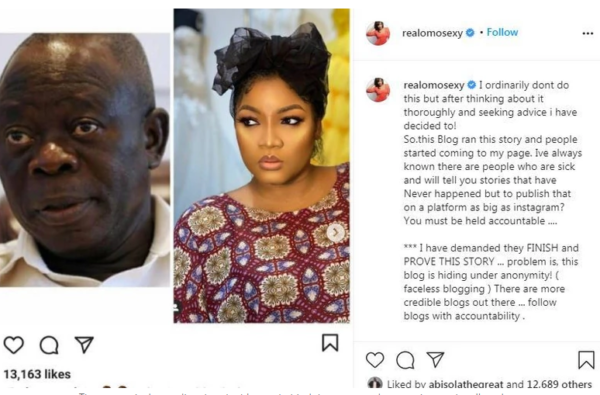 “Can everyone who loves me and what I have stood for all these years pls 1. Report this page 2.Report this page 3. Report this page And to those of you who are addicted to cheap gossip. If you’re not interested in damaging ppl unnecessarily then demand a proof of this Story! I’m giving this 24hrs! Thanks.”

Omotola is one of the biggest names out of the Nollywood industry. She has been married to Captain Matthew Ekeinde since 1996.

The union has been blessed with four children.

She noted that if both parties can agree on getting the test done, it’s not a big deal.

The actress while expressing her personal view on the matter during an interview said she would allow her husband to do the DNA tests for their children just to prove she has nothing to hide.

Omoborty however added that the husband must be ready to give a satisfactory explanation on why he needed to carry out the DNA test as that will determine the basis of the trust in the relationship going forward.